skip to main | skip to sidebar

Waiting for Toto to Run in My Front Door at Any Moment... 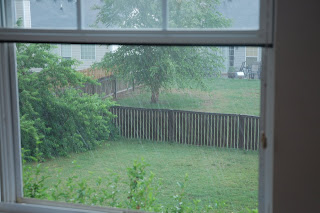 Thinking back through my life all the way to my early childhood, I can only remember it hailing maybe 2 or 3 times and it always felt strange--kind of wrong--seeing ice fall from the sky during such hot days. Since the weather started warming up this year, I think it has hailed pretty much every time we've had a thunder storm! 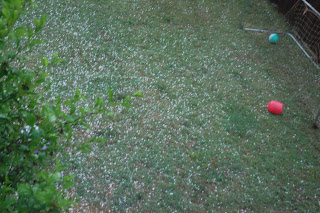 These are a couple of pictures Landon and I took of the hail that crashed down on our house this afternoon. It still freaks me out a little every time it happens (and I wince while the windows get blasted), but Landon is so used to it now that he celebrates every little chunk of ice he sees on the lawn the way most kids cheer for snow. Something tells me we're not in Kansas anymore!
Posted by Jennifer at 4:10 PM No comments: 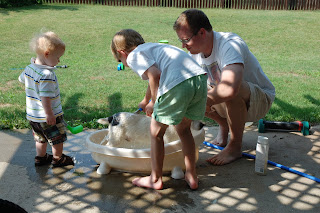 Landon has been completely exhausted from braving the fast-paced last quarter of the school year and Andy is dragging from long hours spent at work running two different bank branches (& I am tired just THINKING about all of it!) so we decided to just kick back today. We spent a lazy Sunday here at the Pfaffl House, just the four of us. The kids alternated between running in the sprinkler and digging in the mud, all while soaking up the hot South Carolina sun. Sounds innocent enough, doesn't it? Yeah, maybe in theory! It did start off relaxing--lounging on the back patio, giving the dog a cool bath with the garden hose, just my boys and me...but things never stay that way around here. (You know what they say about best laid plans)... 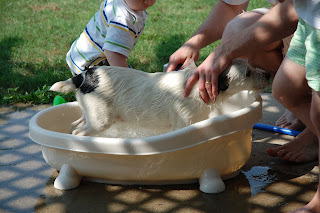 Baylor was having such a good time being "big" with Daddy and Brother. He even got to man the hose (see? BIG). Baylor sprayed and Landon shampooed until Jackson was squeaky clean (hard work, especially in today's record heat). It didn't surprise me that it only took about 30 seconds after we sent the dog back into the house for the boys to jump into the tub of dirty-dog-water (shoes, clothes and all). "Oh well!" I said to Andy! Carpe Diem! Let boys be boys, right? They splashed happily for probably an hour, pouring water all over each other and laughing, both trying to squish into the dog's tiny little tub together as Andy watched proudly and I snapped pictures. 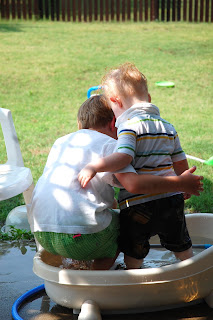 After a while I noticed something strange...No matter how long they sprayed new, fresh water into the tub (and they were spraying constantly), the water never seemed quite clear. Hmmmmmm....After that revelation, I acted quickly (Parenting 101). "Andy! Check Baylor's diaper!" (I give him the fun jobs.) He looked. He grimaced. I gagged & ran for supplies with the speed of a jungle cat. Baylor had picked his relaxing soak in the tub to completely overfill his diaper and I had picked his relaxing soak in the tub to throw caution to the wind (Parenting 101?). Live and learn. Needless to say, our quiet afternoon in the backyard ended abruptly. Both of my boys are now being scrubbed inside in the real bath tub and I am trying hard not to think about the (above) picture of the lovely hair style Landon gave Baylor with poop water. *sigh* Never a dull moment!
Posted by Jennifer at 2:20 PM No comments: 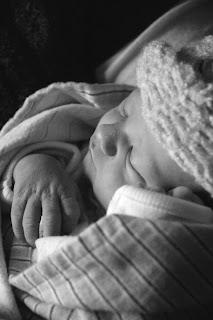 My first child had it all. Beautiful announcements went out when he was born. Every little milestone is recorded neatly in his baby book. Professional pictures were taken at all of the appropriate ages and times. He had cute, matching outfits for every occasion. We bought all the right furniture, filled with the right amount of drawers and cabinets to perfectly organize all of his belongings and keep our house looking normal most of the time. Like good first time parents, we researched everything we did for Landon. We read all of the books, put in hours of grunt work, and did four and a half years of homework so that we'd know what kind of parents we were just in time for the entrance of our little wild man, Hurricane Baylor! Nothing about Baylor's birth (or life thus far) has been planned, recorded or structured. After spending nine months in an Obstetrician's office, having multiple ultrasounds and every medical test known to man....I found myself in labor, turning my car to drive to a midwife's birthing center where all 6 lbs. 14 oz. of Andrew Baylor Pfaffl came into the world. It was about as unplanned as it could get! 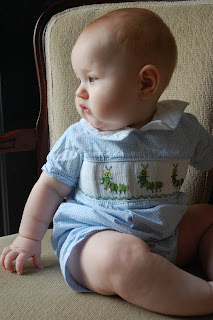 I was almost immobile after delivering him, thanks to my trusty broken tailbone and I got sick with a slew of autoimmune problems almost as soon as I brought him home. The first months were a blur as I was in survival mode. God knew what He was doing, giving a control freak like myself a baby like Baylor, though! This is and was always the most laid back, easy going baby imaginable! He slept peacefully through the night almost from the get-go. He started smiling so early in life that I can't ever remember him not doing it! At only three months old, he had to spend two weeks in the hospital with me and when people asked me how in the world I got through being sick and having a baby at the same time, I always say, "I couldn't have made it WITHOUT him!" Yes, God sure knew what He was doing when he made me wait until I had a Kindergartner before giving me my sweet Bay! What a good lesson in TRUST! 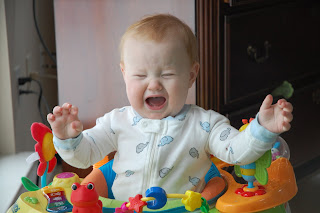 Baylor is now a 23 & 1/2 pound toddler and we can't imagine life without him. He is wild and energetic, refusing to stop moving from the minute he wakes up in the morning until he crashes in an exhausted meltdown at nap time. I clean, he destroys. I organize, he dishevels. Ever the little Evel Knievel, Baylor climbs too high, runs too fast & plays too rough. He is loud an HILARIOUS & loves attention. He will do pretty much anything for a laugh. There is usually a smile on his face and a gleam of mischief in his eye, but you never know what you might get with this kid. He certainly has a mind of his own! He is independent and MUST do everything by himself. He has just learned to toss his head back with dramatic flare an toss himself to the floor with injustice when he's upset. He pulls the child proof outlet covers out of the walls and puts them into his mouth to chew on them while finding objects to stick into the newly-opened holes. He takes the cushioned edges off of the brick fireplace at my dad's house and then climbs on it and attempts to jump off head first. He's CRAZY about Landon and stops at nothing to imitate and impress him. He keeps me moving, which is exactly what I need at this particular point in my life, and I adore every (red!) hair on his sweet little head! 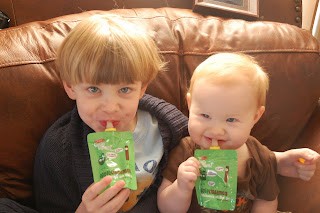 His life so far has been a whirlwind of surprises and adventure--none of it planned or organized. As a matter of fact, any semblance of organization went out the window as soon as Baylor showed up. Before having him, I wondered how I would ever love a second baby. Now that he's here, I can't say no to a 3rd sometime in the future. He has changed me for the better. I want to hug him and kiss his squishy cheeks all day (And I might be tempted to try if he hadn't recently learned to crisscross his arms and "go limp" so that no one can pick him up when he's on a mission.) I can't wait to see what life has in store for the Pfaffl House in the future! I've given up trying to plan and predict at this point! 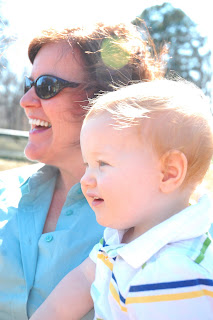 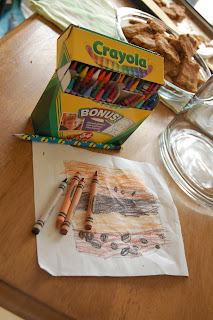 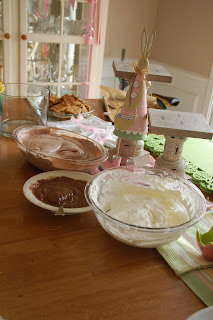 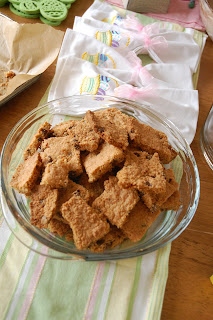 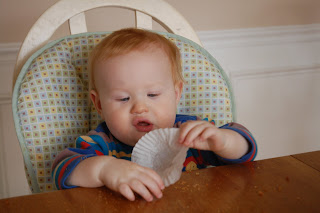 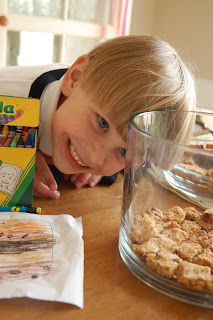 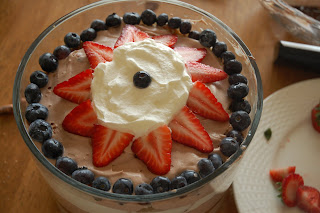 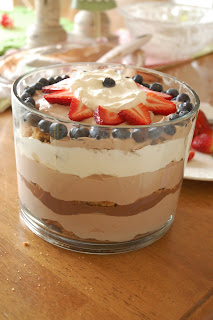 After reading this post today on my friend Andrea's blog,I felt the need to tell a classic Andy story...So,everyone cozy up with hot chocolate and a warm blanket and prepare to say "You married him!":

Once upon a time (a few days ago), my dear husband was being sneaky (and mean) and trying to shoot my brother-in-law with Landon's biggest dart gun over our stair case. Juuuuuust as he was gloating from a direct hit, his foot slipped and all 200 pounds of my gloating husband rolled right down the stairs. (Admit it, Sharon, you love it as much as I did!) Alas, our story does not have the happy ending one would expect from watching a gloating 6'3" man tumble helplessly down a flight of stairs......

Andy's no spring chicken and so of course he threw his back out (a rather convenient complaint when there are chubby babies to be changed and big brothers to be entertained and meals to be cooked and rooms to be cleaned). All of the aches and pains I had been ignoring for weeks just to make it through our hectic new schedule (read: broken tailbone, stitches, abs that had been stretched to their limit and then suddenly let go, boobs that felt like they were about to fall off...) were forgotten by my husband as he dramatically limped around the house, wincing and holding his back gingerly for days. *sigh*

Or at least she has a computer and a working internet connection...

Yes, after nearly one YEAR (where has the time gone???), I am now blogging again! I'm not sure how long this stint will last because I am one day past my due date for our second baby (and I know that even though it feels like it at the moment, he's not going to be in there forever) but I'll give it my best effort. I have MISSED you all terribly and can't wait to catch up with everyone (and eventually catch everyone up)! Yay!
Posted by Jennifer at 8:58 AM 7 comments:

....You have this conversation at the zoo: 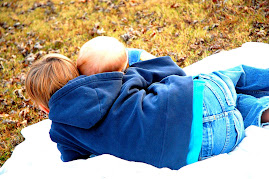 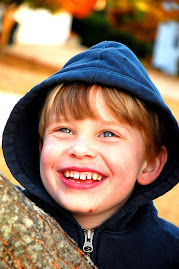 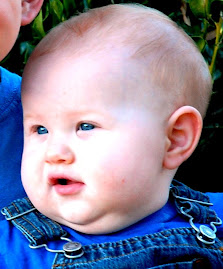 Right Up My Alley 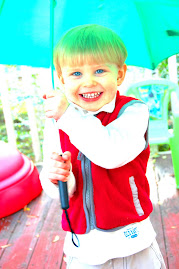 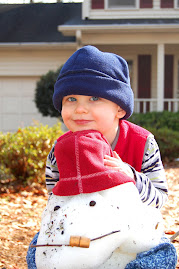 Jennifer
I am 28 years old. I've been married to Andy for five years and we have a son who will be four in May.